I've Moved! Clap For Her

As many things have happened in my life - from new chapters beginning to old chapters ending - I have to adjust, and sadly that means something near and dear is left behind too. I put some serious thought into shutting down this blog and decided to not completely shut it down.

However, it has been paused - more like  the initial stop of a DVD, where folks still have the option to resume or hit stop again to completely end the run. Bubble Gum Pop Rap may return on Blogger but it has moved to Tumblr for the purpose of the site's efficiency, and well - with a full-time, part-time and now back to freelancing - I'm a lazy SOB. Eff yall.

I will miss the pocket change from advertising though!

Mgmt*
*that means management, not MGMT the band
No comments:
Email ThisBlogThis!Share to TwitterShare to FacebookShare to Pinterest
Labels: me and my life 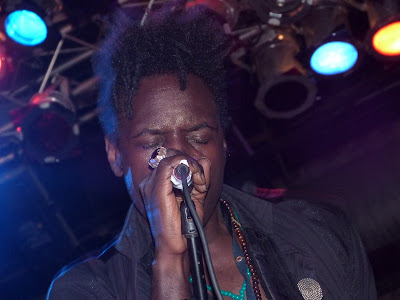 One of the biggest things to happen to me this year was getting to interview one of the most brilliant minds of our time, Saul Williams. He had a show one night, and I pestered his publicist enough to chat with him earlier that day. The insight he gave was amazing!

The first thing I wanted to talk about was Don Cornelius's sudden passing. I still tremble at how he did it, and Saul seemed to feel the same way. I also noticed in the VH1 special on Soul Train how he was frustrated with the change in the music scene that Cornelius was a guy who liked everything to be the way it always is and life is easiest when things are concrete. Saul touches on ageism when I ask him about Don Cornelius, and while he's right, I feel like Cornelius had much deeper problems than just his age. I hope more is reported on Cornelius and he's not just a historic man we now place RIP in front of. Here's where Saul and I discuss the man of Soul Train:


Soul Train: What was your initial reaction to hearing about Don Cornelius’s passing?

Saul Williams: It’s the way that he passed that was shocking. For one, it’s not something that is known to be prevalent in our community. And I can only imagine what it’s like to grow older and lose strength, and become frustrated with the times where things aren’t the way they were – that type of ageism that happens often in our country. I think it becomes really hard for old people who are frustrated with how things start to not work for them. It also brings you back to healthcare issues and how we need to get it straight to where everyone is treated fairly, and the people are taken care of, especially psychologically.

When I asked him about how he feels about the music biz now, he gave me quite an earful about how stuck we've become on the concept of celebrity. I always peeped that in how we direct one another's status to Twitter followers, Facebook friends, as well as our circle. Big city Atlanta is notorious for that! The socialite scene can be more about your following than what you actually do. Even beyond that scene - my niece said to me after I asked her what she wants to do when she grows up "I wanna be famous. I don't know what yet, but I'm gonna be famous." I gave the spiel on having and fulfilling a purpose but what 12-year-old wants to hear that? Anyway, off the soapbox I go. Here's an excerpt of what Saul had to say about that topic:


ST: So what about music now, especially in terms of urban alternative music?

SW: I think we’re at a time now where I look at anyone from Odd Future to Lil’ Wayne to Kanye and Jay-Z, and for the most part people have become more open to new music. But America at-large has established an idea of celebrity. We need to find a way to give the rightful attention to real talent, to people who are exploring. Right now we’re running the risk of having a very formulaic approach to music, to sound, to popularity...

Check out the rest of the interview over on Soul Train's website!!!
No comments:
Email ThisBlogThis!Share to TwitterShare to FacebookShare to Pinterest
Labels: afro punk, interviews, me and my life, rock, soul train, soultronica
Older Posts Home
Subscribe to: Posts (Atom)

Star Watson
One of the best writers you'll ever find! Don't believe me? Ask my mama!! Hahaha... but seriously, she'll agree!